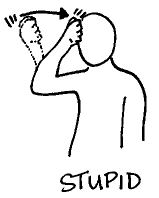 After working on an array of new projects including the awaiting releasee GolfChum, my forum ChipandChat and now venturing into the realms of informational sites (which I’ll tell you about in another post), I came across a principle which I seem to be using over and over again. KISS! At first I didn’t know what it meant, but learnt on various forums that it translated as “Keep It Simple Stupid!”. This word now is being used for startups and sites all over the net, so I thought I’d cover it in its own little post.

You may have already come across the phrase “Web 2.0”. While many people (including myself) overuse this word to the point of extinction, it actually involves the use of the KISS principle. Whilst I was designing the new GolfChum site (which isn’t up at the moment – still under works), I realised that people don’t want clutter. They want information, and a site which is easy to use and navigate. Of course that’s where the name comes in. By keeping it simple you are guaranteeing that people won’t get confused and will be able to make a straight yes / no decision about whether to stay on the site or cross it off.

Simplicity is a thing which no doubt was a factor in the rapid growth of Google. I certainly remember as an IT student in primary school being told to go to Altavista in order to search the web. The painfully slow loading time of this was always a constant pain, and so when Google came along, no wonder it was a smash hit. Sites like Yahoo and Amazon are unfortunately cluttered with information, links upon links, delving into the black hole of their sites. While you can’t write the two off (as they are still mega successful), and because Yahoo describes itself as a “portal” rather than search engine, their over-complicated styles of site may be a cause of distraction with the customer and user.

Einstein himself said, “everything should be made as simple as possible, but no simpler.” In the design world, this could be translated as supplying all the relevant information but in an easy-to-read form, whilst not cutting down on the meat and juice of the site’s content.

To finish off I’ll just give a few of my favourite acronyms quoted from Wikipedia. Some of these have been created to avoid the blatant insult, others better describe the principle. Enjoy!

Or the long KISSSS:

* “Keep It Short, Simple, Small, and Self-contained” – my personal favourite.