The Walter White Guide to Entrepreneurship 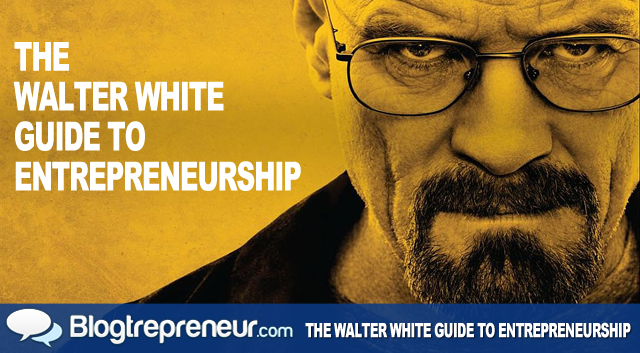 Breaking Bad is a show about its main character’s blackening soul, the vast abyss of the human condition, and the cost of power. Without the meth thing, though, it’s really a story about a teacher who decides to start his own small business. In preparation for the final season, I threw the best episodes on my Netflix queue and these are some tips I jotted down as I rewatched Walter White’s explosive rise to the top.

5. Play to Your Strengths

Walter is a chemistry genius. His primary competition, a high school dropout, uses readily available guides to produce a shoddy product. When you’re thinking of your next idea, define your product by something you know well and develop something that’s undeniably better than the competition.

Drugs, though one of the biggest drains on human society throughout all of history, are one of the best examples of viral marketing you’ll find anywhere. You can’t run an ad for them, social media is a no-go, and Walter’s marketing department is a guy named Badger. The fictional meth that Walter developed, “Blue Sky,” is dyed blue and easily recognizable by its color. A combination of quality, recognizability, and positive buzz will also help you distribute your (hopefully not-illegal) product more easily. Also, there’s rock candy that looks just like it if you’re planning a theme party for the next season.

Mr. White’s — questionable — ability to network is our first negative example. A lot of Breaking Bad is about Walter’s inability to share the meth sandbox with the other kids, and almost all of the problems he faces are because of this overpowering character flaw. Jessie, his impressionable partner, is a nice guy, but he really only sticks around because Walter thinks he can control him. Your employees need to be better at their job than you, though I know I’m not sure I’d be able to resist one liners like “Magnets, b****!”

If you’re making a superior product, someone with better lawyers is going to make a play for your idea. Gus Fring is the Rupert Murdoch to Walter White’s MySpace. After noticing the popularity of ‘Blue Sky,’ Fring made Mr. White an offer he couldn’t refuse. Their original plan, the superlab, and guaranteed distribution chains are all things that any successful entrepreneur can look forward to after the big dogs notice something undeniably profitable.

A hefty part of Breaking Bad is analyzing the brass tacks of small business ownership. Walter’s product is the best on the market, but how do you sell something without a big box store to put it in? Figuring out new ways to sell, market, and distribute your product is an important skill to master and look no further than Kickstarter and Louis CK’s digitally distributed standup special for real-world evidence of how this works.

At the end of the day, Breaking Bad is a classic show that analyzes the lengths one man will go to for a legacy. He’s not in it for the money, he’s in it for the glory. He forgets to be human along the way, though, and that’s something that every entrepreneur should remember. The show’s upcoming final season will not only be about Mr. White’s fall from glory, but a modern day morality tale for the importance of humanity in the modern entrepreneur. Also, it’s gonna be freakin’ awesome.