How to Find the Best Sit and Stand Stroller 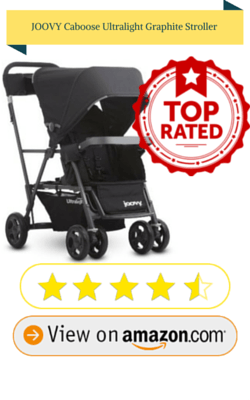 After more than a decade working in marketing, I recently decided to become a full-time stay at home mom to take care of my 4-year-old son and 6-month-old daughter. As a 34-year-old mother of two children at such different ages, I was interested in finding the best sit and stand jogging stroller that could accommodate both my very active son and infant daughter.

After reading many sit and stand stroller reviews, I learned that these models are a great new trend in stroller technology, featuring a seat upfront for an infant or young child and a larger rear-facing seat in the rear that allows for the bigger kid to either ride or stand up, perfect for older kids who are big enough to walk but don't want to be strapped down in a stroller when it's time to go out.

Below are my recommendations for the 5 best sit and stand double strollers: 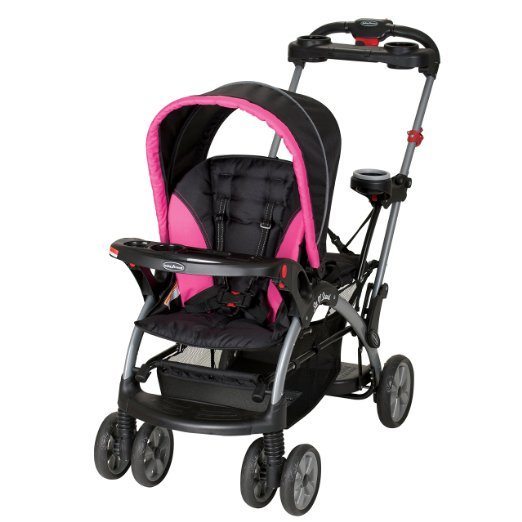 It's clear to see why many people consider the Ultra from Baby Trend to be the best sit and stand double stroller. The stroller can accommodate up to two infant car seats and is rugged enough to handle two bigger children totally 100 pounds.

Weighing just 25 pounds, you'll be hard put to find a lighter double stroller than the Baby Trend Sit n Stand Ultra. The basket is quite large and more than big enough to hold a diaper bag and some snacks. The stroller folds down very easily and is quite compact, making this an essential item for every car trip. 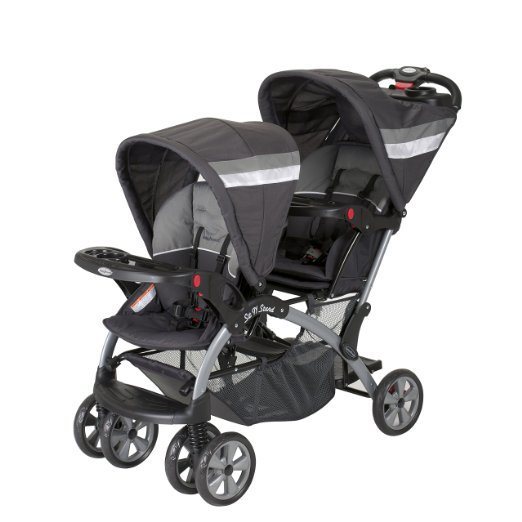 Designed to handle up to two infant car seats, it's easy to see why Baby Trend products regularly rank high on lists of the best sit and stand stroller. The Liberty Double has a few extra features, including a tray and cup holder for the child (which can be removed) as well as a tray for the parent/pusher that has two cup holders.

Each of the two children in the Liberty Double get their own retractable canopy and there's plenty of room for the bigger child to stand or move around. There's also the option to use the removable rear seat to allow two children to sit comfortably for longer periods of time. 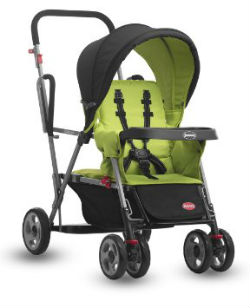 In sharp competition for the best sit and stand stroller model, the Caboose from Joovy is ultra compact and only weighs 28 pounds despite the fact that it is rated for up to two children weighing a combination of 90 pounds. The child in the rear can either stand up on a platform or else enjoy the ride from a bench seat.

The JOOVY Caboose can be easily folded down with the press of a button and will fit in car trunks or rear cargo areas with no problem. The front seat can be adjusted to three different angles and can accommodate an infant car seat. 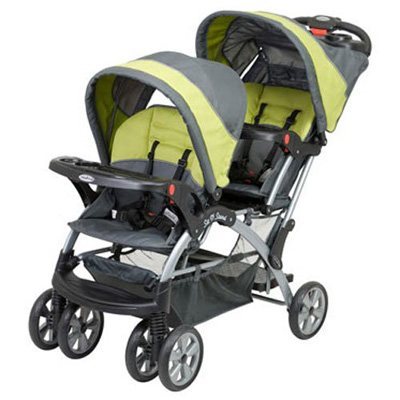 A very luxurious stroller, the Baby Trend Sit N Stand Double comes in one of three attractive color schemes. Each child gets their own canopy, which can be removed and there's plenty of room underneath for diaper bags and other supplies. Big enough to allow one child to lie down, the Double also includes a safety brake and a large tray for the parent/pusher complete with two cupholders. The children also get their own tray and cupholder, which is a nice touch.

It's possible to use two infant car seats with the Double, making this stroller an excellent choice for parents with two growing children. Young children get a five-point safety harness while older kids can stand or ride with ease. 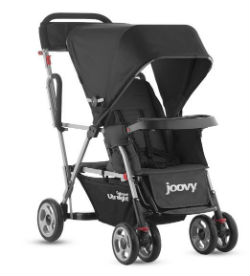 Weighing just 22 pounds, it's easy to see why many parents consider this the best sit and stand stroller on the market today. Don't be fooled by its lightweight construction as it can handle a combined weight of 90 pounds for two children. The bigger child in the rear can either stand or ride on a bench seat while the front child can either be strapped into a harness or ride in an infant car seat.

The parent/pusher gets a large tray with two cupholders and there's abundant storage underneath to bring along everything you need for a longer trip. High-quality wheels make pushing the Ultralight nearly effortless as it glides with ease.

While sit and stand strollers are an innovative idea, be aware that the seat for the older kid can sometimes be a little small so it's not ideal if the bigger child needs to spend a long time sitting down. Read through all the sit and stand stroller reviews to find one that matches exactly what your needs are as it's unlikely that you'll own one of these for more than a few years. But when you do have two kids of different ages, the best sit and stand strollers are perfect as they're usually quite lightweight and fold up rather easily. It's not always easy to find a sit and stand jogging stroller as most of these models are primarily designed for indoor use or very flat terrain, but there are some "off-road" models out there.

Read our other reviews of double strollers.

Emily is a 36 year old former executive who now loves being a full time mom so she can stay healthy, happy and active with her two young children.